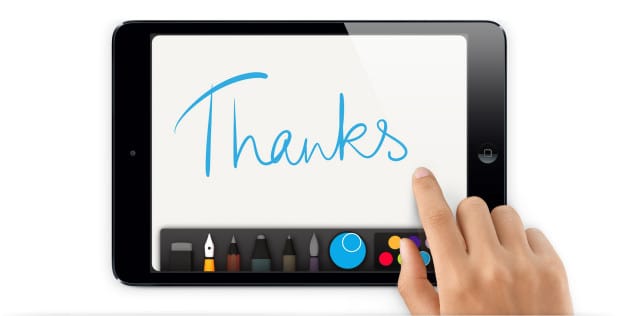 CUPERTINO, California―May 16, 2013―Apple today announced that customers have downloaded over 50 billion apps* from the revolutionary App Store. Customers are downloading more than 800 apps per second at a rate of over two billion apps per month on the App Store. The 50 billionth app was Say the Same Thing by Space Inch, LLC, which was downloaded by Brandon Ashmore from Mentor, Ohio who received a $10,000 App Store Gift Card to commemorate this historic milestone.

“Apple would like to thank our incredible customers and developers for topping 50 billion apps downloaded,” said Eddy Cue, Apple’s senior vice president of Internet Software and Services. “The App Store completely transformed how people use their mobile devices and created a thriving app ecosystem that has paid out over nine billion dollars to developers. We’re absolutely floored to cross this milestone in less than five years.”

The App Store opened in July 2008 with 500 apps. Since its introduction, Apple’s incredible developer community has created an app for doing almost everything imaginable on an iPhone, iPad and iPod touch.

“We were blown away with our success on the App Store back in 2008,” said Rich Riley, CEO of Shazam. “And almost five years later we continue to be amazed with how much people love using Shazam on their iPhone or iPad. With the App Store, we can effortlessly provide users with updates that give them great new features while making it easy for new users to discover and download Shazam for themselves.”

“We started our company in 2008 as three friends focused on creating great educational apps for our children,” said Caroline Hu Flexer, co-founder of Duck Duck Moose. “The App Store brought ‘Wheels on the Bus’ to the world in a big way. Sixteen apps later, a fan base of millions of parents, children and educators and a growing company with 20 full-time employees, we couldn’t be happier with our success.”

“The App Store has been integral in getting us into the hands of millions of iOS users and has transformed our business,” said Elizabeth Francis, Chief Marketing Officer of Gilt.com. “Our apps allow our members to access their favorite sales on Gilt every day, anytime, anywhere. App Store customers have proven to be a loyal shopper base and have been influential in making Gilt the globally recognized brand it is today.”

The revolutionary App Store offers more than 850,000 apps to iPhone, iPad and iPod touch users in 155 countries around the world, with more than 350,000 native iPad apps available. App Store customers can choose from an incredible range of apps in 23 categories, including newspapers and magazines offered in Newsstand, games, business, news, sports, health & fitness and travel.

Apple designs Macs, the best personal computers in the world, along with OS X, iLife, iWork and professional software. Apple leads the digital music revolution with its iPods and iTunes online store. Apple has reinvented the mobile phone with its revolutionary iPhone and App Store, and is defining the future of mobile media and computing devices with iPad.